Margento (Chris Tănăsescu), Steve Rushton, Taner Murat, Various Wanted / Se cauta diversuri offer us a very interesting volume of computational translations and prosodized algorithmic poetry. An original (almost) missing / and five literary / computational / visual translations, Iaşi, Timpul, 2021. Invoking the play on account of the reader practiced by both Ovid and Marlowe, the authors assume the same approach and offer five “mind-boggling translations”. First, they omit the original poem Thanks (to Ovid). A kind of matricide, or paricide made by hand, as in the case of King Lear.

Steve Rushton likens the book to a three-part song in the program. The song he proposes in the opening of the concert is Honesty (to Ovid),

“An elegant hypnotic acoustic arrangement in its historical echoes subtly woven into the warp of the piece as in a rich oriental rug / – not new, but, precisely, well – aged in sparkling color contrasts.”

And because we are here in the interstices of art, the amalgamated poem Se cauta diversuri is similar to the Boleló rav ravelian, with the progression of the rhythm towards the well-known dramatic apogee.

The intention is one of intersemiotic translation: the illustrations in the volume were taken from an A5 drawing block with stained sheets, baked for a quarter of an hour in the oven, then “translated” as black and white book illustrations by photography and photo editing. Sometimes the outlines were erased to initiate the floating of shapes over the pages, like poems.

Honesty (Ovid’s) is a poem by Steve Rushton translated by Taner Murat and endowed with a Prologue in which it is shown that “the narrator is the artistic alter ego of a poet who is out of inspiration.” We are, therefore, in a postmodern modernist outpatient clinic with narrative structures. In fact, the poem would be “a long couplet for a lecture” that studies Christopher Marlowe and John Dryden’s translations of Ovid’s Loves from the point of view of the dislocation of the three poets.

“The unquenchable alter ego, the ‘master of poetry’, / He has returned to the old rhythm of the drum again.” The prosodic asymmetry is doubled by the motif of the manuscript found:

“In this poem, in addition to the clear stanza, / You will encounter couplets with a lame style / This is the consequence of the position in which / By pure chance I found in the basket / with missing crumbs, hard irons ”. Beyond the paraphrase of Ovid’s verses, there is a hidden connection “Between antiquity and the reborn age – / In Ovid’s writing then translated by others / What in the art of interpretation discovers pleasures, / And which through translations smoothed the path / To great works, to the grandiose verse / Inspired by Shakespeare, the incomparable poet / In the English art of Renaissance verse ”.

The Ovidian opera is translated by two poetics: Marlowe (the one who “was a lad / When he wrote with verse after poem, / Elaborating the couplet with epigrammatic verse, / With distinct metrics and Ovidian style” and Dryden).

Steve Rushton is also a drummer, so he’s a master of rhythms and measures. The construction with iambi and trohei does not scare him, the lyrics are usually written in tetrameter, as is the square rhythm of some blues songs, but also the five-legged, syncopated rhythm of Bo Diddley, or traditional sub-Saharan rhythms. They also help to move from Marlowe and Dryden’s pentameter to the Alter Ego tetrameter, where a leg (disguised pentameter) is added.

The creative algorithm also involves hybridization with the Rolling Stones version of Buddy Holly’s song, Not Fade Away. Sometimes the lyrics are compressed or extended. All three poets are scrupulous when it comes to rhythmic accuracy and the dialectic of rhythms. Thus, the lyrics become a synthesis of the thesis of regular rhythm, but also the antithesis of its syncopation.

The volume is also a project aimed at implementing a fluid poetics that targets fluctuation, contamination and process. A computational method has been used that can track the probability of occurrence of words in various contexts. In parallel, the flow of the poem determines the gravity of the words belonging to certain themes to each other and the mutual contamination…

Notes (on comparing English Translations by Christopher Marlowe and John Dryden from Ovid’s Amores 1.1, 1.4 & 2.19) is published by Contemporary Literature Press, the online publishing house of the University of Bucharest 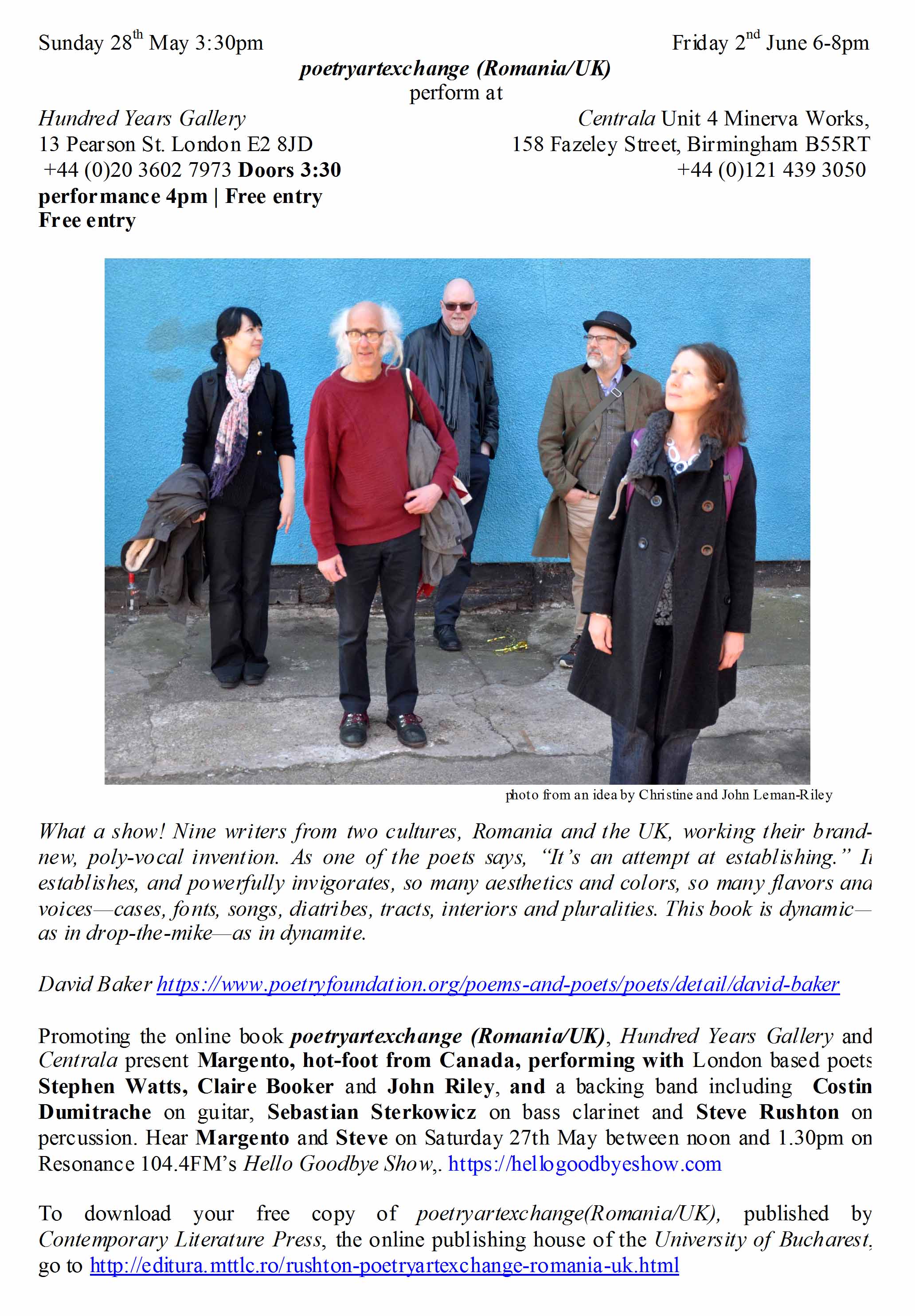 To downloaded your free copy go to https://editura.mttlc.ro/rushton-poetryartexchange-romania-uk.htm

towards a new art

Burning a Paper Plate – Towards a New Art erbacce-press 2015. £4.95, available at http://www.erbacce-press.com

PRICE £4.99, PUBLISHED BY NOT YOUR AVERAGE TYPE

Reviving the 7 inch single in book form  Jan Noble, Not Your Average Type